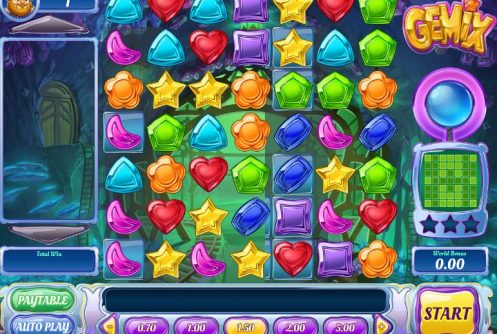 Gemix is a cascading video slot game played on a 7×7 grid.
Symbols drop down in the grid to form winning combinations.
Wins are achieved by getting 5 or more symbols in a connected cluster where they touch each other horizontally and/or vertically.
Winning symbols are removed and new symbols drop in to fill up the grid. The game continues to cascade until no new winning combinations can be created.

• Chain Lightning: Two, opposite to each other, corner symbols shoot out an electrical arc hitting symbols. These symbols are transformed into one of the corner symbols.

• Light Beam: Light rays shoot out vertically and horizontally from a symbol on the grid. All symbols in the affected column and row are transformed to other symbols.

• Crystal Warp: A symbol is selected on the grid. The selected symbol and all matching symbols are warped to other symbols.

• Nova Blast: A symbol is selected on the grid and explodes. Adjacent symbols are removed from the game in this huge explosion. The explosion then retracts and creates a core of symbols. This core consist of the same symbol.

The game continues normally after the effect, allowing the crystal charge meter to charge up for more effects, possibly creating additional wins!

The game can become Super Charged. When the crystal charge meter is fully charged it is possible to super charge the game by winning on additional symbols.
If you manage to win on enough symbols and fully super charge the crystal charge meter before there are no more cascades, your already achieved wins as well as all additional wins following the effect during that game round are multiplied by 3!
Super Charge can only be triggered once per game round.

Gemix includes different worlds. Each world is assigned three different patterns.
The currently active pattern is indicated on the screen.
To clear a pattern you have to achieve wins on the indicated grid positions.
Clearing a pattern activates the next pattern for the current world.
If you clear three patterns in a world, you reach the next world and you are awarded the World Bonus.
The World Bonus is increased with any win during a game round.

• Miner’s world: Wild symbols drop down from the top and land on different positions in the grid, replacing the regular symbols.
Up to 10 wild symbols can appear.

• Princess’ world: An edge symbol is picked to act as a starting point. The symbol is turned into a wild symbol.
The wild symbol then spreads to adjacent symbols until it reaches one of the edge symbols of the grid.

• Wizard’s world: Up to 8 sticky wilds can appear in different positions on the grid.
The sticky wild symbols do not drop down when symbols below are removed and are also not removed when part of any winning combination.
Sticky wilds stay for one game round or until Crystal Charge is triggered. 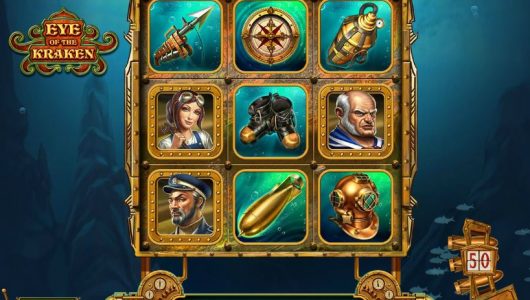 Eye of the Kraken Slot 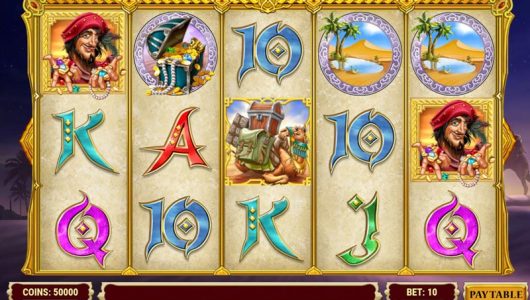 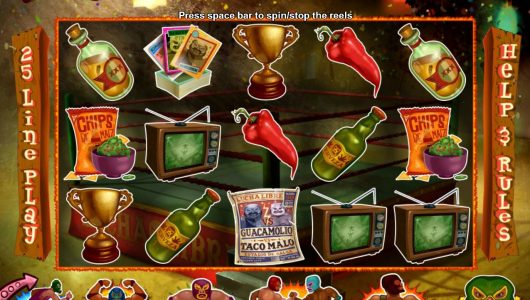 I’m a big fan of slots games, thats why I’m always searching the web for slots games, and Gemix Slot is absolutely one of the best slots games I’ve played online.
The main goal of this slots game is to connect the clusters where they touch each other horizontally and/or vertically allowing the crystal charge meter to charge up for different effects.
The graphics and the sound effects of this slot game are stunning.
The exciting option in this slot game is the different worlds option, where each world is assigned three different patterns.
The world that i liked the most is the Wizard’s world!
This online casino game is worth trying for sure!

Gemix is really a awesome and exciting cascading video slot game.
I always like to play online slot game and have playing lot of slot game but i think Gemix is the best one i have ever played.
I like the World Bonus award most.Each world is also very exciting.
I very impressed of its graphics,sound,its step by step arrangement.In a one word this slot is superb.
I already share this slot with my friends.

Really fun slot game.
I like the classic feel of the gems.
This slot game offers different world stages.
The wizards world is awesome.
This real casino style slot game is addicting and I like to play it to kill time in between my college classes.

My favorite thing about online casinos is the amount of variety when it comes to games.
Gemix slot game is unlike any other slot games I’ve ever seen in a casino – online or otherwise.

As much as I love the classic ‘reel’ slot games, I really enjoy the option of a different play style while trying to win big.
It’s fun to watch the clusters pop but the sheer amount of bonuses make this game a must for any online or mobile casino.

Wow!A well written and well thought out article on all things about Gemix.
If you’re new and looking to learn all about online Gemix slot this is the place to be.
Nicely written article about winning cash prizes by playing Gemix slot.
A lot of useful informations that can help me and anyone interested in playing Gemix slot and get maximal winnings with less risk of loss.
Helps you learn about all the patterns and symbols.

The first I played Gemix Slot, let’s say I didn’t expect it to be playable online because I haven’t played any games right on the website, not to mention online slots.
This was the true experience to play online slot game right in front of the screen.
The graphic was good, which I found it was surprised because most slot games didn’t have good graphic.
This slot machine game was simple, yet was addicting that I wanted to keep playing to win the biggest jackpot.
For the fundamental, I found this slot machine game entertaining, plus the music was good enough to not get bored.
I highly recommend those who like to play slot machines give this a try.

Gemix slot game is unlike any other slot games I’ve ever seen in a casino – online or otherwise.
Nicely written article about winning cash prizes by playing Gemix slot.
The graphic was good, which I found it was surprised because most slot games didn’t have good graphic.
I very impressed of its graphics,sound,its step by step arrangement.
In a one word this slot is superb.I already share this slot with my friends.

OMG, I love this slot machine game!
The gems remind me of bejeweled, very classic.
I love all the different stages that this slot game offers and it’s so addicting!
I can’t stop playing it, it’s a great time killer.
Highly recommend this one, one of the best slot casino games I have played!

Pretty cool slot machine game.
I like the music and the graphics are very nice.
It took me a minute to figure out how to play but once you understand, it’s addicting.
The bonuses are great too.
I highly recommend this game to anyone that likes free casino slot games.